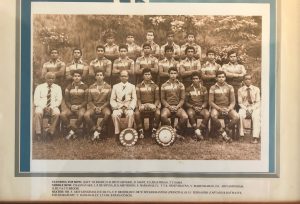 My stand out take from season 82’ was not that at the end of the season the team had won the Bradby and the Canon De Sarem trophy ; but the long hard return trip to Kandy after losing the issipatana game on penalties in the early part of the season ,and the galvanizing gesture of legendry bus Driver Banda when it appeared the boys were going to have to endure further heartache that night.

The loss was hard on the team as any loss was for any Trinity team. The deadly quiet all the way back still remains in my memory as a reflection on how we were going to salvage the rest of the season from there on.

The first signs of any life on the bus happened when Mr Ariyasingham stopped at the usual haunt in Kegalle for some food and the boys trooped one and all into the night kade. With a twist on the adage “ drown your sorrows ” ; food seemed to be the panacea to cure all ills that night . The team needed life back in them and to a man they worked on that salvation ; so much so that Mr Ariaysingham did not have enough money to settle the bill. In what could have been a further distressing abyss for the team to endure; Banda promptly pooled all the money he had towards saving the day, with no intention of reimbursement .

That gesture was the shot in the arm the team of 82 needed .  If Banda could do something so selfless , then the very least the team could do was fight our way back the rest of the season.

No one in the team of 82 wanted to ever feel that way again for the rest of the season, and as captain leading a team that had immense belief it would never happen again meant we were on the road to recovery and success.

The team had also to endure an emotional roller coaster with the great “ Bertie” who was coming to the end of his illustrious coaching career. The Monday after the Issipatana game coach Bertie believed the team should just run and exhaust the loss out of the team and placed a nigh impossible task of physical endurance on the team. Still facing pangs of dejection on the loss ; a punishment was the least the team needed and I stepped in addressing the team saying “ those who believe they need to take on this task feel free to do so , and those who don’t, like myself come stand behind  me “ . To a man the entire squad stood behind me which meant the team was willing to face any consequence for their leader. Good Leaders are made by great teams.

The quick witted coach used that development as a great team bonding opportunity quickly saying “ boys,  I was testing your resolve in your leader and his qualities of leadership; and I am more than satisfied both he as your leader and you as a team have passed that test “

The rest of the season was one of profound success ,and the unity and bond of that team has lasted the test of time.

I forever am their skipper and they forever are my team.