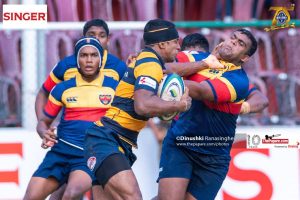 Royal College came up with a fantastic overall performance as they dominated their traditional rivals Trinity College, Kandy 34-17 in the 1st leg of the 75th Bradby Shield rugby encounter which concluded at the Pallekale Rugby stadium this evening.

It was a very different Bradby Sheild encounter as the rugby picked up after the recent tragic events that plagued the country. Pallekalle was somber minus usual fanfare but bathed in sunlight as the game kicked off after the traditional lineups.

The rugby however, was anything but as two the fine- tuned teams went on to display a fierce battle. Royal toiled initially to bust through a formidable Trinity defence as the hosts continuously repelled the visitors, who were anything but predictable. The eagerness and strength of the current holders was amply displayed as they did not give an inch and refused to buckle.

The hosts opened the scoring after a easy run from inside centre Tevin Karunanayake. Brilliant and slick rush defense from Trinity put Kalindu Nandila in a hole, as he kicked straight into the hands of Tevin, going on to beat a couple defenders before going over untouched. Miranga Subasinghe missed his first kick on goal. (Royal 0-5 Trinity)

Royal hit back after a piece of individual brilliance from skipper Thulaib Hassen. After the restart, Trinity opted to play sevens inside their own 22 which came back to haunt them. A handling error in the left flank saw Hassen pounce on the ball and dive over the whitewash. Dulan Gunawardana pulled it too much to the right and missed the conversion. (Royal 5-5 Trinity)

After the initial nervous moments, Royal settled down a tad and continued to make the Trinitians pay for their penalty count which played a crucial role in their second try.

Recognising the acres of space on the outside, Miranga Subasinghe tried to execute a superb cross kick only to be charged down, took the hit and recycled to Achitha Radeeshan who crossed the line in splendid isolation. The conversion saw the vistors’ lead balloon out to 12-5 with 20 to play in the opening half.

After Trinity had been penalised three times in the next 10 minutes of the match, Dulan Gunawardana goaled the penalty against Ekanayake for hands on the ruck and the score was extended by another 3 points. (Royal 15-5 Trinity)

The lineouts were becoming a problem for the Royal. They would kick a penalty for touch and then lose the lineout to Trinity and their cunning band. Trinity got an opportunity and were going left when Tehan – turned a little pass outside to Dhiren Rattwatte as he scampered and crashed over from 10m out, to the posts. Subasinghe added the extras to cut back the deficit going into lemons on a high.

The hosts opened the scoring after a scintillating run from outside center Harsha Samarasinghe. A slick line-out move saw fly-half Karanunayake put Harsha in a hole, who went on to beat a couple defenders before throwing a dive over untouched.
(Royal 15-17 Trinity)

Royal acted swiftly and brought on the forward replacements to add extra weight to their pack and it turned the game. The forwards worked their way up field and found the overlap on the outskirts of the backline before Lehan Gunarathne scored his first try. (Royal 20-17 Trinity)

Another lovely set piece move put Lehan Gunarathne over the line for his second try. Royal shifted the ball outside and straightened the line back through the player of the match Yasojana before offloading to Skipper Hassen, who then put Gunarathne through. Maleesha Perera added the extras. (Royal 27-17 Trinity)

The final nail in the coffin was thumped in by Kevin Samarasekara who scored after his side played a quick penalty and spotted the yawing gap in the Trinity defense, which helped Royal take home a massive 17-point lead to Reid Avenue.